What tensions shake the foundations of our social contract, and how do we renew it? The Covid-19 crisis has revealed the desire, need, and capacity for change in the general public and governments. In the past, the social contract has allowed us to translate tensions into opportunities around which we form society. While the social contract of the twentieth century aimed at societal immutability based on infinite growth, job stability, and a given and static well-being, its twenty-first-century counterpart works to build the capacities of transformational dynamism.

In the first few months of the health crisis, despite the uncertainty, worry, polarisation, and—for many, unfortunately—human suffering, there was an almost unanimous call to return to a different “normal”. Since then, the desired “new normal” gave way to a factual reality, largely endured and not co-created as a social project. However, this hope for change is still possible. A better tomorrow cannot only be hoped for; it must be constructed.

Despite our best intentions, the mind naturally stumbles in the face of the complexity of a matter so incomprehensible as society itself. This complexity is why we offer the social contract as a framework for shared reflection to help action arising from this desire for change. It allows us to explain inevitable societal tensions that the crisis has exacerbated, which are all opportunities for transformation. As Winston Churchill famously pointed out in the darkest hours of World War II: “You should never let a good crisis go to waste”.

In summary, when we consider these tensions, the stake of this crisis seems to be the capacity for action: not to endure crises but to allow, and even lead, societal transitions despite the tumult—because, as serious as it may be, Covid-19 is only a precursor of other more fundamental crises disrupting our social model.

The three conditions of change

Not all crises necessarily lead to societal transformation. For example, the 1930s crisis led France to the forty-hour week and the precursor movements of the Second World War. However, ten years later, what do we remember as a change in the post-2008 financial crisis? Before talking about the social contract, we can ask ourselves whether the systemic Covid-19 crisis carries the necessary conditions for change.

Analyzing the occurrences of past decades, it seems that a crisis can be transformative if it meets three conditions:

So there is room for hope—but how do we turn that into action?

Towards a new social contract

As a brief reminder, the social contract that we inherit from the twentieth century is a tripartite contract between public authorities, businesses, and the people, whether it is, depending on the circumstances, made up of citizens, employees, or consumers.

In detail, the model dictates that, against taxes, the public authorities provide companies with an ecosystem allowing economic growth through justice, education, or even all the physical and virtual infrastructures of a country. Second, in this climate of growth, companies trade wages for work through stable jobs. Finally, in exchange for citizens’ taxes, the public authorities provide social security to the people to guarantee a certain level of well-being. 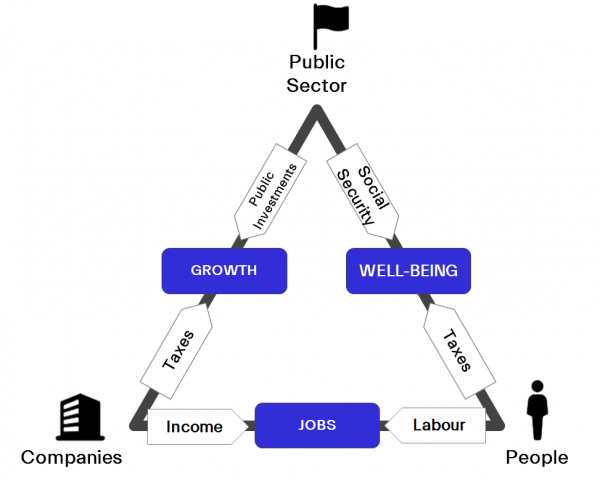 However, this model has shown weaknesses for several years. The growing pessimism of developed countries, lack of confidence in institutions, and the fact that most young people in many OECD countries do not consider democracy as an essential element of society attest to a general mistrust towards this version of the contract, otherwise stable for nearly a century.

More fundamentally, we can potentially justifiably question these observations only in the face of the discrepancy between the historical model of the social contract and current inconsistencies: the mechanism of infinite growth on a finite planet; the idea of economic stability in the gig economy; and the desire for well-being guaranteed by social security in a context of growing inequalities and heightened political polarization. 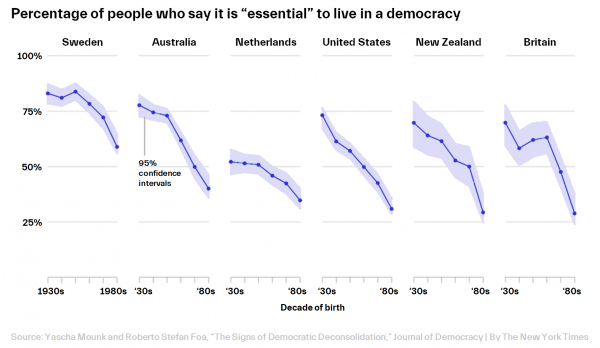 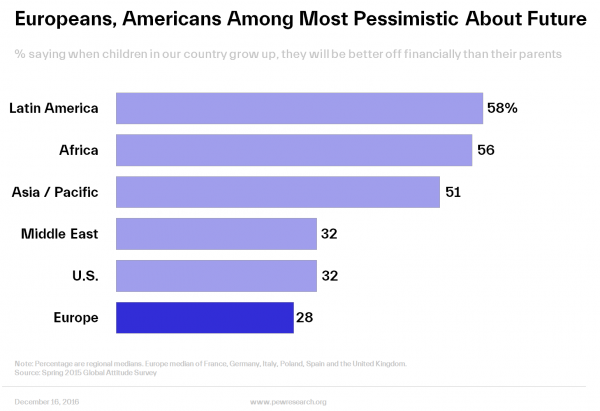 Even if it were to evolve, the social contract is an engaging and fairly shared tool of societal understanding that therefore has the merit of framing a reflection of transformation. Moreover, in this potentially transformative crisis, this same framework of thought offers a prism that allows us to explore different exacerbated social tensions as well as the choice of societies available to us.

Let us take each bilateral relationship in this tripartite contract, in turn, to see what the crisis reveals as tensions and as levers for transformation. Far from being exhaustive, the tensions described below seek to show what questions the pandemic could allow us to address, in public dialogue, the recovery plans, the positioning of our institutions, the elected programs. This article aims not necessarily to encourage change on any of these points but to make use of the crisis by clarifying the topic and opening up social co-creation.

1. Economic steering: as in any crisis, the public authorities have increased their role in the economic sector, making it possible to limit the worst of the short-term impact. The tension that arises is not how to support the economy, but more fundamentally, how to define the role of public action in the economy. Does the state, at all its levels, have the responsibility of encouraging a short-term economic recovery, allowing the private sector to operate again as efficiently as possible, or should it seek to steer an industrial policy towards long-term transformation goals?

2. The platform economy: Without going into the many controversies surrounding it, Stop-covid and other contact tracing applications show a possible new public use of the platform model. Its use aims to solve a community problem, promote social good, and not a particular client. The tension around digital platforms goes far beyond the question of their regulatory model, as the GAFA hearings before the US Congress in the summer of 2020 might suggest. The real question around digital platforms that the crisis allowed us to ask is whether they will become an essential aspect of the analysis and distribution of public policies or remain a private-sector tool.

3. Globalization: the Covid-19 crisis coincided with the nationalist aspirations of many countries and the fragmentation of the global digital economy, illustrated by the 2020 TikTok and Huawei cases, urging us to challenge our supply chains. In the months and years to come, we will have to decide whether we want increasingly local value chains at the risk of rising geopolitical tensions or economic resilience through highly complex value networks maintaining a globalized economy.

In times of crisis, the state’s economic role increases naturally, but the extent remains uncertain. In addition, this part of the social contract equally impacts the societal positioning of companies. At Demos Helsinki, for example, we have increasingly supported corporate activism—such as Ylva, one of Finland’s most widely known restaurateurs, that decided to no longer serve beef corresponding with the parliamentary debate on the country’s agricultural policy.

4. Consumption: The previous strain on our value and supply chains has an obvious counterpart in the links between consumers and businesses. When the case permitted, consumption choices during confinement reflected societal convictions: support or not for gig-economy employees, support for small neighborhood shops, the comfort of delivery solutions, desire to maintain human contact.

It is not clear whether these practices will continue beyond the crisis, but the societal implications of consumer choice have been more explicit in recent months than before. It will be interesting to see whether consumers will continue to purchase products and services online from major players, thus favoring price and comfort, or whether they will consume based on their needs, societal values (like human interaction), and hyper-localism.

5. Work: work practices during the crisis also changed enormously. However, beyond its modalities, it is the very nature of work that this crisis invites us to question. Between the development of man-machine interactions, the increasing volatility of many employment models, the economic non-valuation of certain activities of societal value such as the education of children or the social link with fragile and isolated people, we can imagine a societal choice between maintaining mass structural unemployment as a medium-term economic transition mechanism or a model redefining work and promoting proactive lifelong learning mechanisms.

In the social contract, we often consider interactions between companies and individuals (whether consumers or employees) arising from social transformations or laws like supply and demand. Still, they can just as easily be seen as transformative tools. At the end of 2019, we also supported Google and SAK (the largest trade union in Finland, alone weighing a third of the country’s working population) to develop concrete lifelong training tools. The results and proposals were presented to the Finnish Parliament at the end of 2019 and could be integrated into the country’s recovery policies.

6. Universalism: in times of crisis management, one of the main challenges becomes social cohesion. Thus, “universalism” has played a crucial role in many countries: in Spain, with the minimum living income for the poorest, or in Great Britain, with a housing guarantee for anyone on the street.

The societal question posed by the pandemic is to choose whether universalism should be a general principle (and a mixture of policies) that strengthens cohesion and resilience for the reconstruction of societies, or whether universalism is a particular model, used mainly as a channel for the distribution of public policies and services.

7. Governance: in the face of official and traditional crisis communication, namely controlled and reassuring by the mastery and stability of the nation-state in this time of extreme uncertainty, a few countries have taken a different approach. Jacinda Ardern, Prime Minister of New Zealand, preferred to Facetime daily from home to share the news of the day and her personal feelings. Camilla Stoltenberg, director of the Norwegian National Health Agency, for her part, in May 2020, published an official report acknowledging the government’s overreaction and error in having confined the population at the start of the health crisis. The opening words of the Finnish government program in June 2019 perfectly summed up this new governance philosophy: “Faced with constant change, we don’t think we know in advance what will work. So, we will seek to inform ourselves and to experiment in order to act for the good of our citizens.”

A major decision as to the legitimacy of our institutions arises today: should governments keep their traditional role of guardians of stability and focus on resilience in the face of the crisis or take a new role of transformative governance: guiding society through the changes necessary for its future?

This crisis has shown us both the public’s and the authorities’ desire, need, and capacity for change. In addition, the social contract has allowed us to transform tensions into opportunities that form society. Covid-19, a dress rehearsal of even more foundational imminent cultural shocks, taught us that we have maintained the capacity for collective and voluntary action despite uncertainty.

While the social contract of the twentieth century aimed at societal immutability based on infinite growth, job stability, and a given and static well-being, that of the twenty-first century works to build the capacities of transformational dynamism.

Whether this reflection will enrich society with greater responsiveness to change or grant us the means to proactively carry out necessary transformations for our civilization at all administrative levels remains to be seen.

*This is a translation of an article that was first published in 2020 in the French political magazine Horizons Publics, the issue ending up winning the Palmarès Media Pro 2021 award. The article has been slightly updated. Inspiration for it came from a webinar that the Demos Helsinki future specialists put together back when the pandemic erupted: “Emerging changes in the post-pandemic world“.