Interstate 35 is a highway running through the centre of Austin, Texas. When the six-lane highway was opened in 1962, no one could predict that there would now be a campaign dedicated to stopping its expansion. The highway has created long-term issues by cutting access between East Austin and the city centre, creating a pocket of low connectivity and urban decay in the primarily minority-ethnic parts of the city. While it achieved its goal of improving connections from Austin’s sprawling suburbs to the city centre, it did so at the expense of less fortunate people living in its path.

Infrastructure has a key impact on the ways in which our economies function, how we interact with each other and with nature, and ultimately, on our wellbeing and capabilities.

Traditional ways of constructing infrastructures, such as Interstate 35, are extractive; in providing benefits to some population groups or businesses, they take away from others, or the environment. This development mindset has long functioned on the assumption that overall wealth would offset the negative side effects of infrastructure projects. Instead, over time it has contributed to societal inequalities and undesirable environmental outcomes.

Big infrastructure is losing its appeal

However, it does not have to be this way. Instead, infrastructural development can be used to help rejuvenate communities and the environment, whilst providing the connectivity solutions that they were primarily designed to provide. These regenerative infrastructures either directly rebuild what has been destroyed by human activity, or they enable lifestyles that rebuild.

For example, as Austin is growing rapidly, the Texas Department of Transport has recommended expanding Interstate 35 from six to twenty lanes, predicting a strong increase in traffic figures. Still, local groups are pushing back against this development. They argue that placing the highway in a tunnel and building public transport and green spaces at ground level would serve the expanding city better. These alternative plans would both encourage more environmentally friendly modes of transport, and help rebuild the community hurt by the extractive piece of infrastructure running through the neighbourhood.

A vision for 21st-century infrastructure: make it regenerative 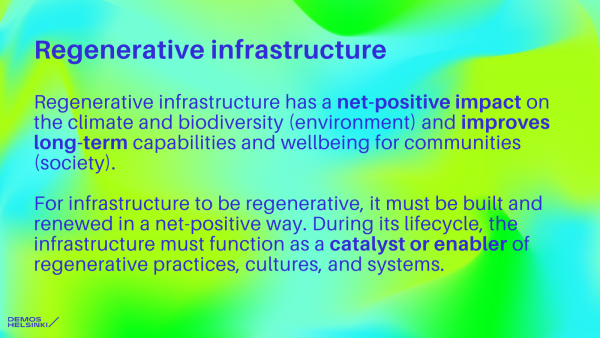 The regenerative approach aims to reposition human activity, most importantly, production and consumption, as part of natural and social systems. It is regenerative as it directly contributes to the growth of both. Indeed, regenerative denotes an ideal that may never be fully achieved and, in that sense, it is a theoretical innovation.

Still, it is about negative capability: its main value is to offer a source of imagination and inspiration for a thesis in investment in and governance of public value. As such it can be seen as a historical continuum of linear systems and circular systems. The concept of regenerative infrastructure aims to enable us to imagine what life with a zero carbon budget means.

What needs to change in how we plan infrastructure?

Projects have to be looked at holistically, taking into account the entire lifecycle of the piece of infrastructure during its planning. The construction, use, reparation, and potential replacement must all be considered in order to ensure that the project supports a net positive environmental impact over the course of its existence.

Without a regenerative approach, infrastructure projects will continue to exacerbate environmental degradation and social inequities; something that we can ill-afford with the current state of the environment and extreme weather conditions. Regenerative infrastructure also empowers the shift of planners’ priorities — from the shaky “benefits versus costs” argument, to the exciting prospect of directly contributing to joyful and sustainable societies.

Reshaping human lifestyles is one component of contributing to a positive environmental impact, but governance and private enterprise must be key players in driving change as well. Good infrastructure improves connectivity, transport, and other networks that are important for business. Therefore, cities and governments must incentivise regenerative development. These developments will shape people’s long-term decision architectures and businesses’ options so that they act in ways that have net-positive impacts on society and the environment.

Who do we build for?

Regenerative infrastructure cannot remain an alternative development option. Its real-life implementation is increasingly urgent, as physical infrastructure construction and renewal are moving at an extremely fast rate. The World Economic Forum estimates that $79tn will be invested in physical and digital infrastructure globally in the coming twenty years, and both the EU and the US have recently allocated large sums to infrastructure modernisation.

As the pathways to maintaining global warming below 1.5°C are becoming increasingly limited, it is crucial to rethink the role of infrastructure in society, and how the tremendous funds being invested into its development can be used to transition from the extractive to the regenerative.

At the very least, governments and developers must ask themselves: who do they build for?