Demos Helsinki, the Finnish Environment Institute SYKE and the Helsinki Institute of Sustainability Science HELSUS realised the PATH2030 initiative in autumn 2018. The project was part of the Finnish government’s analysis, assessment and research activities to evaluate Finland’s sustainable development policy. The recommendations were published in February 2019 during the general election season, and the results then made their way into the newly formed government’s official programme.

All UN countries are committed to 17 sustainable development goals (SDGs), together forming the 2030 Agenda of goals to be reached by the year 2030. Finland is the first country to assess how the United Nations SDGs (2030 Agenda) are to be implemented in policy. The PATH2030 team had no applicable ready examples to base their evaluation on.

The recommendations of the initiative were finalised before the general election and they provided useful input for selecting the focus points of the new Government Programme. The historical and ambitious aim of a “carbon-neutral Finland in 2035” was listed in the programme in spring 2019.

“Nothing progresses without a political will and mandate. We stated that the 2030 Agenda aims need to become the baseline of the Government Programme. This luckily happened, and the current government led by Sanna Marin has the first programme that can be seen as a programme of sustainable development”, says Demos Helsinki’s senior expert Satu Lähteenoja.

More than 100 individuals took part in workshops related to the initiative. In addition, almost 100 people were interviewed in the project. A final report was conceived and the recommendations found in it continued to be developed through methods of co-creation. The PATH2030 working group presented their evaluation in six parliamentary groups and organised a joint hearing involving four different committees.

The historical and ambitious aim of a “carbon-neutral Finland in 2035” was listed in the programme in spring 2019.

Due to its pioneering nature, the PATH2030 initiative has triggered also international interest. An international evaluation network produced a guidebook for other nations based on the work. The guidebook was published in New York in February 2020.

“The most important aspect of these initiatives is maximised societal impact. It is also relevant that the lessons can be put to use in other societal contexts. For instance, by companies and municipalities when they are considering how to make sustainable development part of their own operations”, Satu Lähteenoja notes.

The Finnish Evaluation Society SAYFES honoured PATH2030 with the Evaluation Act of the Year award in 2019.

“The PATH2030 evaluation played a role in developing the execution of policy evaluations by using the methods of developmental assessment in a diverse and participatory way. The bold evaluation framework will serve as a reference for future evaluations”, the award jury’s justification stated.

Read more on the PATH2030 evaluation. 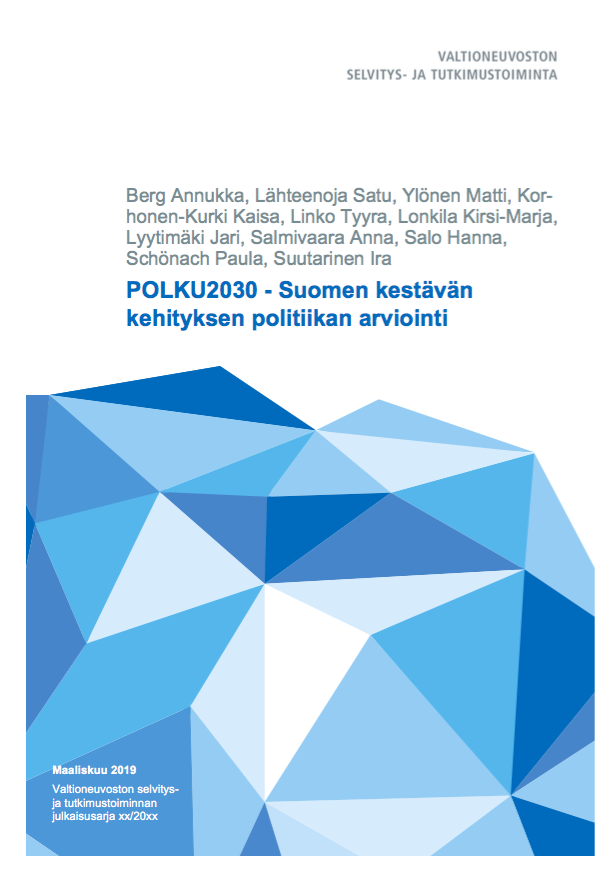