When trying to measure and predict human behavior, data must be enriched with ideas and emotions. The case of COVID-19 showed the limits of quantitative methods, as expert echo chambers were unable to translate the data into conversations that could ultimately lead to action.

I am writing this from Athens, Greece—a place that feels strangely relevant these days. Ancient Athens was a city built to facilitate conversation. It is perhaps no luck that this is where the concept of sophia (or wisdom, meaning theoretical knowledge) was developed, or that it grew into our more commonly used philosophy: love of wisdom. Nowadays, both sophia-wisdom and philosophy seem rather distant, even frivolous.

As Geoff Mulgan wrote for Demos Helsinki back in May 2021, “we certainly live in societies that are far richer in data and knowledge than ever before. But it’s not obvious we have become wiser.”

Wiser? Who cares? As we live under the perpetual threat of crisis, the need for informed action becomes more urgent. There is no time for philosophizing, let alone looking for solutions that are not backed by evidence. Data is efficient, ubiquitous, and digestible. Yet, in a slightly meta manner, we may be able to prove that conversations are far more important when dealing with collective problems. In the case of the pandemic, while the data was there, it was private and public conversations—the ideas and emotions that power them—that led to action. In other words, data alone is not enough to instigate actions: conversations and actions are more connected than we think.

Conversation and action: the case of COVID-19

When the pandemic erupted—a phrase you’ve probably heard about a thousand times by now—we were all unprepared, and so was our language for it. For example, in January 2020, online interest in “coronavirus” was equal to 0, even though its dramatic effects in China were already almost palpable. In February 2020, CNN (for instance) had published 20 articles about the coronavirus. Tokyo was still preparing for the Olympics, even though Hong Kong was already experiencing an economic strain from the unknown virus. One month later, the number of articles in CNN had gone up to 121. The Olympics were postponed, and so were our lives. It really did all happen within one month.

Yet, the World Health Organization had published an outbreak statement on the 5th of January—two months before most countries even cared enough to report on this “viral pneumonia”. By the time we started talking about the disease, there had already been 40,000 documented cases; who knows how many suffered without us knowing. Now, we know that there had been calls for a pandemic for years. We also had the experience of SARS; Ebola; the Clade X experiment. The predictions, the research, the alarm bells, were all there.

In February 2020, a report was published that ranked countries based on their preparedness in the case of a pandemic. The US was by far the highest-ranking country, followed by the UK, the Netherlands, and Australia.

Figure 02. The countries best prepared to deal with a pandemic, 2019 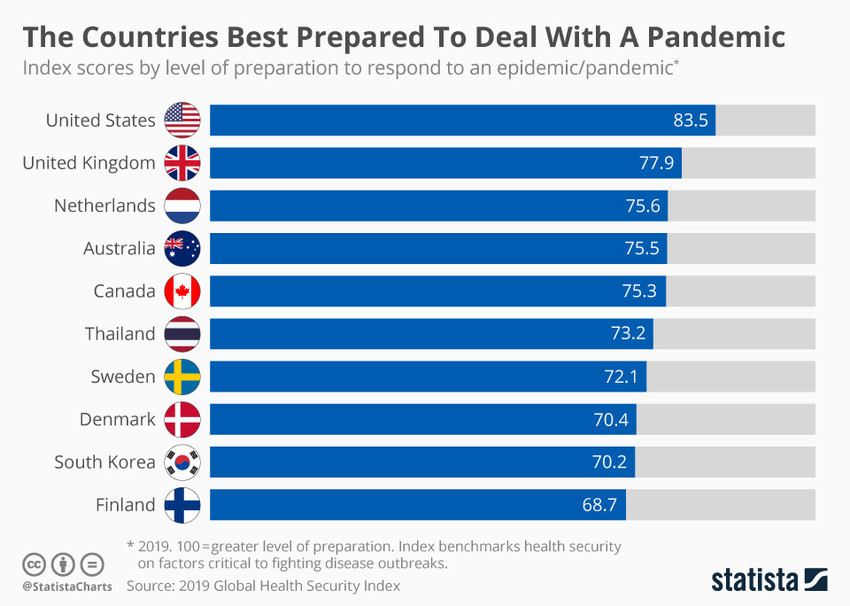 We all know how that went. In the real world, the US and the UK are still some of the absolute worst performers, as out of 141 countries they rank at 138 and 139 respectively. The Netherlands isn’t doing much better, ranking at 125. Our sophisticated models, aimed at providing order to chaos, did the opposite of what should be done in times of crisis. They reassured us of the efficiency of our systems, instead of showcasing risks and areas of improvement.

As many before me have pointed out, these models severely lacked variables for lack of trust in the government; leadership overconfidence; limited information; unwillingness to sacrifice the economy over human lives. While technically rigorous, they lacked the thoroughness achieved only through collective, spherical evaluation. After all, as it often happens with data, the output will only ever be as wise as the input. One wonders what would be different had these models been open for discussion with social scientists, doctors, nurses, public servants, and even patients. The only defect of these groups is that they were not invited to the table.

Prioritizing only what can be measured can lead to biased results. As data has become the only valid springboard for argumentation, unmeasurable variables can be entirely discarded, for they cannot yield satisfactory evidence, or are proclaimed “wishy-washy”. This both leads to and results in a vicious cycle of expert overconfidence. As behavioral economist Erik Angner wrote back in 2020, overconfidence is the biggest of all psychological biases, and it significantly affected our response to the pandemic. In retrospect, predictions and forecasts about society can depreciate in value if they are not grounded on the premises of epistemic humility.  Experts are not protected from this bias unless their commitment to epistemic humility becomes a daily conscious choice.

But how can experts enrich their understanding and seek further knowledge?

The universality and objectivity of science are what have created the incredible bloom of innovations in our world, including medical achievements that have improved and saved millions of human lives. So, we must extend our gratitude to the scientific community, and scientific thinking. Yet, we cannot fit everything into the box of natural science—like economics, immaterial health, and group behavior. Words still matter, and so do ideas.

In a recent Demos Helsinki paper, Loops for Wisdom, Geoff Mulgan presents a number of processes that can cultivate wisdom in society. The core idea behind these proposals is to abandon the incomplete notion that expertise is an exclusive, individual trait. There is much more expertise found in the collective. It is therefore not in the hands of those who understand or perform quantitative analyses to find solutions; instead, opening up the problem is what leads to better outcomes. Yes, even when creating a vaccine in record time to save humanity from a deadly disease.

You see, the people of Athens knew that wisdom is not only about theoretical knowledge, or skill (sophia). It’s not only about being objective, and universal (episteme, or science). Free from the pressures of market forces and politics, Athenians were encouraged to develop two other forms of wisdom. Phronesis was one of them, implying both good judgment and excellence of character and habits. So, not only knowing what knowledge is relevant but also keeping yourself in check when applying it. Then, there was techne: the wisdom found in those who are closest to the problem, the craftsmen, the artists, those who feel the problem, not only intellectually, but also physically and emotionally. 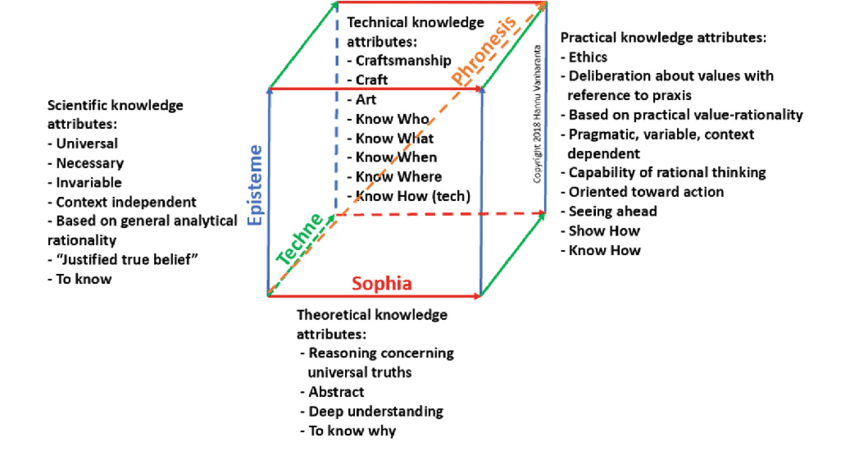 This leads us to another reason why no one was talking about the pandemic: distance. Quantifying human problems and strictly approaching them from an operational perspective creates distance. The conversations become too expert, too inaccessible, too rational. While distance can serve as an ally to objective problem-solving, it also leads to exclusive echo chambers where only the chosen few have a say.

When it came to the pandemic, we were unable to be proactive because the problem was too far from us. The moment the disease came to our doorstep, we were able to act. When mainstream media started covering the pandemic, when we exchanged that information between us, when we debated with friends, researched alone, and informed our colleagues, we became part of the solution. It was our proximity to the disease that enabled us to find solutions. We can see this happening with climate action as well. Conversations lead to actions. So, let’s have the right ones.

It’s July 2021 and we have an opportunity to re-orient ourselves. Many of us have come together to “refine the cone” of uncertainty, hoping that our sophisticated forecasting will give us a clue as to how we can survive. Some ask about how certain sectors will bounce back, concerned about the return of business travel, or hospitality. Some care about the health of our economies, our cities, and our planet. Others try to imagine new ways forward, based not on what is available to us today, but on what should become available in the future.

And, of course, the looming dystopia of an environmentally, socially, and emotionally bankrupt planet is at the end of these discussions. Still, all of these conversations—whether radically progressive or cautiously incremental—are the pillars of our interactions and the foundations of our actions. We must commit to educating and informing each other because this is the only way change will happen.

Now, with the rise of technology and artificial intelligence, what will keep our humanity alive won’t be our capacity for analysis. It will be our capacity for synthesis and emotions. The key figures of the next century will be those sitting perfectly in the middle of digital elation and human conversations.

So, as we self-reflect and create the world anew, we must always ask ourselves: What conversations are we having? With whom?

The ideas presented in this article are still being developed. We encourage you to get in touch to discuss them, and to explore their wider meaning. For opinions, feedback, or comments feel free to email the writer at angeliki.vourdaki [at] demoshelsinki.fi. In case your thoughts are included in the article you will be quoted. This article is an updated version of an opening statement made by Demos Helsinki in our May 2021 webinar, Wise Societies. In the webinar, we presented a Demos Helsinki paper called Loops for Wisdom, written by Geoff Mulgan, that urges society to redefine wisdom as a collective and inclusive trait.