The corona crisis has rapidly changed the way we look to the future. The National Foresight 2020 project mapped how should the Finnish foresight system be developed in order to meet the challenges of the 2020s.

The state of emergency caused by the coronavirus crisis has raised many kinds of discussions and reflections on the future throughout the society. We see new calculations and models of virus progression every day, and risks and uncertainties are considered by both decision makers and citizens. It can be said that the crisis has momentarily opened up the future: at the moment, the future does not seem like a self-evident continuation of the past, but instead many things are now open to us as uncertain and possible.

How can foresight help in a crisis?

The corona crisis highlights the importance of foresight. Foresight can be defined as organized, explicit work on the future that provides an understanding of alternative futures and strengthens decision-making. Foresight is, of course, necessary in the midst of a crisis. However, it is even more important to anticipate possible crisis situations and to act proactively so that crises do not develop.

As the world changes rapidly, the importance of foresight becomes even more pronounced. If the events in China’s Wuhan Wildlife Market can shake the world with their consequences, what kind of upheavals can the future hold? Changes do not happen one at a time, but simultaneously: the climate, work, democracy and many other things are all changing.

Finland has an internationally acclaimed national foresight system. It includes, for example, the Government’s report on the Future, the ministries’ futures reviews, foresight work carried out at the regional level, the Parliament’s Committee for the Future and various thematic foresight concentrations. Foresight is conducted in Finland by a wide range of actors and networks in the public sector, companies and the third sector. Indeed, national foresight can be seen as an ecosystem rather than a system. The National Foresight 2020 project mapped the situation of Finland’s national foresight ecosystem through surveys, interviews and workshops, and proposes measures to develop the ecosystem. How should the Finnish foresight system be developed in order to meet the challenges of the 2020s?

The research project discovered that considering the rapidly changing circumstances, the foresight work conducted in the Finnish foresight system is one-sided. For instance, futures information is mainly collected from one’s close environment, and for the majority of actors, foresight is based on forecasting likely developments rather than exploring new opportunities or surprises. There are exceptions, but a large number of organizations consider relatively narrow future horizons in their foresight work. If we look straight ahead towards the probable future, will we notice the events in the Wuhan Market? Would it be worth looking at the world more like a horse, with eyes on both sides of the head?

There is no one correct perspective on foresight. Foresight work requires several different perspectives and methods depending on the situation. Let’s go back to the coronavirus as an example. Once the crisis has erupted, short and medium-term forecasts and modeling are needed. In the longer term, a broad radar is needed to sense where the next Wuhan Market events could be. In the coming years, we will probably listen with more sensitive ears to epidemiologists’ interpretations of the world than in the last ten years. But at the same time, one should be able to identify new phenomena that have not yet been experienced. However, in addition to being prepared, we also need positive visions of the kind of future society that we want to build. We must also be able to look beyond the crisis.

Different approaches to foresight can be illustrated with six foresight frames (Minkkinen, Auffermann & Ahokas 2019). The predictive and planning frames are needed in day-to-day operations and to meet the challenges of the near future. For example, the regional foresight work on labor, education and competence needs largely looks at probable developments. Scenaric and visionary frames look further into the future and take into account more uncertainties and alternative options. For example, the joint scenario work of the Finnish ministries seeks to outline alternative development paths for major transformations, such as the changing working life. 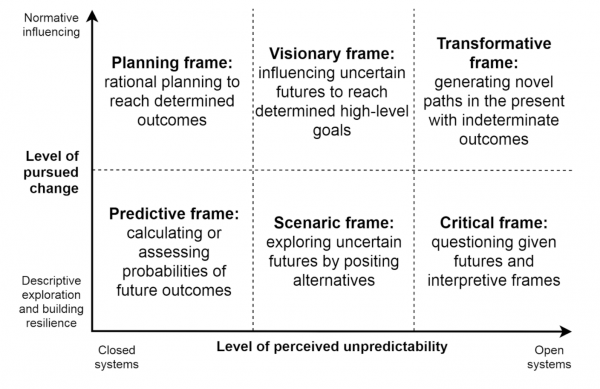 In an unpredictable and rapidly changing world, an increasingly critical and transformative approach to foresight is needed. In order for national foresight to meet the challenges of the 2020s and beyond, actors need to be able to constantly question and renew their own perceptions of the future. However, uncertainty also means that new opportunities open up for making the future. For example, innovations related to ecological sustainability can open up new paths, even if the future at the end of the road is not clear.

Preparing for the next crisis, together

In our research material, only a small number of actors placed a strong emphasis on surprises, experiments and proactively influencing their operating environment in their foresight work. The same actors also tended to favor more unusual methods (such as games) and sources of information (such as information collected from citizens). However, it is particularly this kind of broad view of foresight that needs to be increased in national decision-making, in addition to forecasts, scenarios, and planning.

The national foresight ecosystem needs all the foresight approaches described above. Actors who do foresight in different ways can find their places in the system and complement each other’s foresight work by networking. The Finnish National Foresight Network coordinated by the Prime Minister’s office is already doing valuable work in bringing various foresight actors together. In the foresight ecosystem updated for the 2020’s, better dialogue, information flow and coordination are needed to ensure that the foresight objectives and approaches of the different subsystems best serve national foresight as a whole. In addition, the link between conducted foresight work and policy-making needs to be strengthened through new approaches. The relatively weak international links of the ecosystem also need to be strengthened. The growth soil of the ecosystem can be nurtured by democratizing foresight work and developing futures literacy as a general capacity within society. In this way, Finland can be better prepared before the next crisis situation comes knocking on the door.

This article is also published on the Finland Futures Research Centre’s Blog.