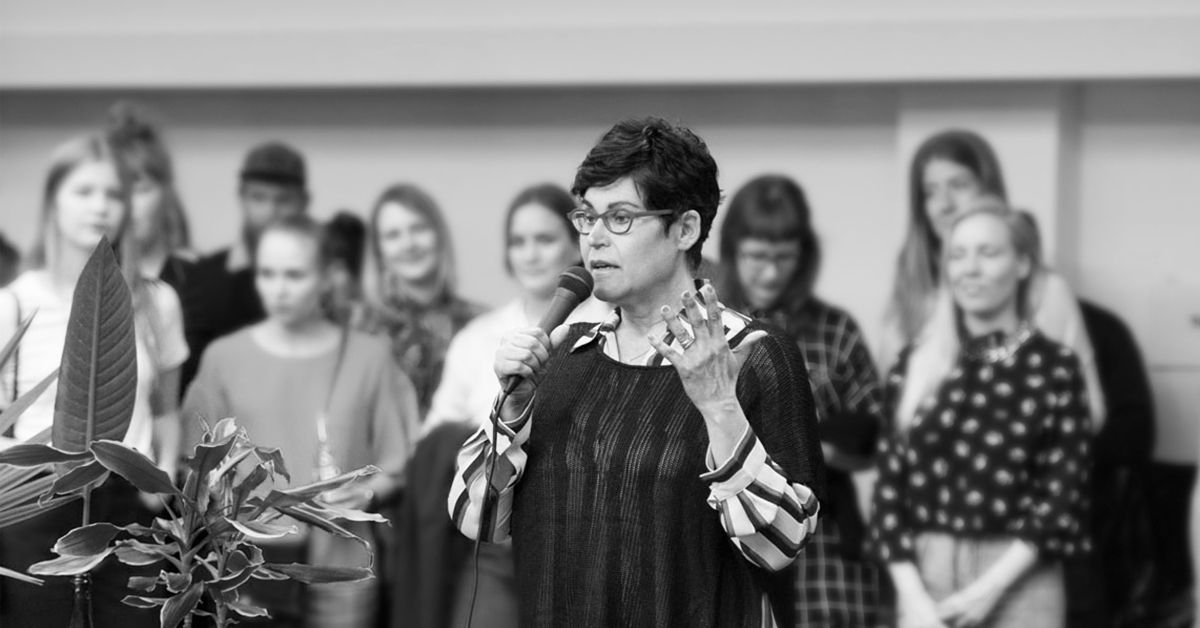 Tuija Talvitie passed away on 2nd  January 2020. She was the Executive Director of Crisis Management Initiative (CMI): a Finnish organisation working to prevent and resolve violent conflicts globally. Throughout her decade-long career as their Director, Tuija built CMI into a global front-runner in its own field. In addition, Tuija acted as the Chair of Demos ry’s Board of Directors and was an important supporter, mentor and role model to many at Demos.

In fact, Tuija Talvitie was one of the first people to see the need for Demos Helsinki and its way of thinking and operating, already encouraging us to go further even before anything official had been established, not a line had been published or any meetings or workshops organised.

At the end of the summer 2004, the Finnish Innovation Fund Sitra and the Helsinki offices of the British Council, led then by Tuija, had invited Demos, a London-based think tank, to organise a workshop in Helsinki on social innovations. The founders of Demos Helsinki, Roope Mokka and Aleksi Neuvonen, had already become familiar with the work of the Demos UK: in fact, they had started playing with the thought of founding a think tank in Finland that would share a similar outlook. During that workshop in August 2004, the founding partners first made contact both with Tuija and the people behind Demos in London.

Tuija was inspired by the thought of a Finnish think tank which would challenge the prevailing themes and solutions offered in the public discussion. She met with Aleksi and Roope several times during the winter of 2004-2005 during which time the thought of founding Demos Helsinki developed and turned into action. Demos Helsinki’s first-ever project resulting in a report on the welfare state in a community-driven era was carried out in co-operation with the Demos of London. Considering Tuija’s work in the British Council, she had a clear interest in following this co-operation closely; thus, she took part in several of the project’s workshops both in Helsinki and London. As a result, she became a natural part of Demos Helsinki’s closest circle.

In the following years, Demos Helsinki consulted on several of the British Council’s projects whose themes – e.g. Zero Carbon Cities, Network effect – were, in many ways, ahead of their time. Tuija was also very interested in new approaches to learning and co-operation as well as the solutions stemming from them. Consequently, Demos Helsinki prepared a presentation on transformative learning for the British Council’s projects led by Tuija as well as organising a tour for the guests of a European conference to visit the most interesting Helsinki-based actors on peer action and social innovations, e.g. the youth organisation Oranssi and the co-operative building Loppukiri.

For a small, fledgling think thank, Tuija’s invitations and requests were a sign of its work and existence being noted, and they marked the beginning of several long-term themes in Demos Helsinki’s work as well as creating many important contacts along the way.

In 2009, Tuija left the British Council to lead CMI in its global work on resolving conflicts. For Demos Helsinki, the much larger and internationally operational CMI was a great role model and a benchmark on how an expert organisation aiming at societal change can operate and how it should be led. On several occasions, Tuija was an excellent mentor whenever we were looking for new solutions to develop Demos Helsinki and its operations further.

As a result, Tuija became quite naturally a member of Demos Helsinki’s Board in 2015 and its Chair in 2016. “During these years, Demos Helsinki grew into an internationally renowned, future-oriented actor on experimental government,” the former Finnish President Martti Ahtisaari and the Chair of CMI’s Board Alexander Stubb wrote about Tuija’s years as the Chair in her obituary in Helsingin Sanomat on 19th January 2020.

Both in board meetings and  workshops, Tuija brought with her the enthusiasm, curiosity and presence so very typical of her as well as her desire to encourage others further. She was interested in new things, able to see the power stemming from people’s excitement, and ready to trust that good things and brave people can carry. She especially wanted to highlight the opportunity at Demos for people’s growth and feeling proud of their work and deeming it meaningful. For people at Demos, what made Tuija trustworthy was her deep, personal worry for the state of the world as well as her ability to empower us to improve it.

In addition, collaboration took place in other arenas as well. In 2017, Tuija led the jury of the Finnish universities’ Helsinki Challenge competition. Demos Helsinki was responsible then for designing and executing the science-based team accelerator programme in co-operation with the University of Helsinki. Tuija was extremely interested in utilising technology and innovations in conflict solving, and so, between 2018-2019, CMI organised the Peace Innovation Challenge competition in both Palestine and Ukraine. The goal of these challenge competitions was to find new ways to strengthen the position of women in peace mediation. Demos Helsinki had the honor of designing and executing these competitions.

The alliance between Tuija Talvitie and Demos Helsinki lasted for 15 years. It was full of practical work, but, luckily, the themes were the most important ones of our time: world peace, stopping climate change, increasing democracy, and people’s opportunities to learn and make progress. However, more important than these noble causes was that we together continuously looked for new and improved ways of promoting them while questioning our familiar ways forward as well as our previous choices.

Tuija always had her eyes firmly fixed on the future. Her memories, optimism and care inspired Demos Helsinki and its people to continue working with causes important to Tuija. Still, we miss her sorely.

Words of remembrance from the people of Demos

“With Tuija, you always felt valued and capable of doing things – the things done with Tuija made you stronger. It is difficult to grasp that one can no longer turn to her and that there will no longer be moments to share with her, to feel joyous in her approving, lifting presence.”

“Most importantly, when thinking of Tuija, one remembers the warm and strong ability to be present. Tuija knew how to listen to both words and energies and thus she was able to capture the audience in an empathetic and charismatic way.”

“Tuija’s sense of humour, her warmth, humanity, wisdom, curiosity. A source of inspiration for being a leader and for growing as a human being.”

“Tuija’s strength, her light, encouragement and laughter are a lasting role model.”

“Tuija was an actor of peace, good society and global equality with whom I got to work in different ways over a decade. With Tuija, you could, during one sitting, discuss the situation in Jerusalem, developing peace-supportive technologies, raising children well and organisational administration, and, for all of these topics, you would get wise and empowering advice.”

“Tuija emanated presence, wisdom and kindness every single moment: what an incredible trait. I along with many others got to experience this and enjoy Tuija’s support and advice throughout the years. The world lost a wonderful human being – the best one of us. Fortunately, Tuija’s vision and her memory live on in several people for a long time to come. We – and the world – get to be grateful for this.”

Always remembered: our dear friend, long-time supporter, inspiring role model and inquisitive-minded ally, the Chair of our Board, Tuija. We offer our deepest sympathies and cherish Tuija’s memory with warmth and gratefulness.

The people of Demos

Due to the grieved passing of Tuija Talvitie, the Vice-Chair Oona Frilander will chair Demos ry. The new Chair of the Board will be appointed at the annual meeting in spring 2020.